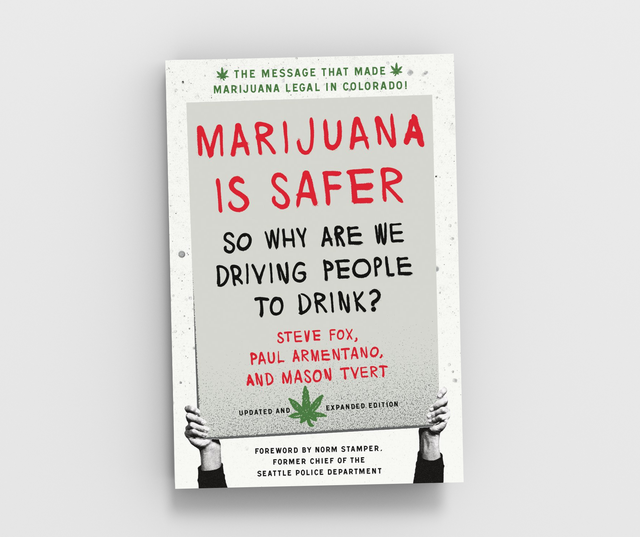 Book: Marijuana is Safer: Why Are We Driving People to Drink?

(Purchase is a donation to Kentucky NORML)

Donate $25 to Kentucky NORML to receive Marijuana is Safer: So Why Are We Driving People to Drink? 2nd Edition Paperback by Steve Fox, Paul Armentano, Mason Tvert

This is a paperback copy of the informational booklet.

In 2012, voters in Colorado shocked the political establishment by making the use of marijuana legal for anyone in the state twenty-one years of age or older. In the wake of that unprecedented victory, nationally recognized marijuana-policy experts Steve Fox, Paul Armentano, and Mason Tvert revisit the "Marijuana Is Safer" message that contributed to the campaign’s success--as the first edition of this book predicted it would in 2009. In this updated and expanded edition, the authors include a new chapter on the victory in Colorado and updates on a growing mountain of research that supports their position.

Through an objective examination of marijuana and alcohol, and the laws and social practices that steer people toward the latter, the authors pose a simple yet rarely considered question: Why do we punish adults who make the rational, safer choice to use marijuana instead of alcohol? For those unfamiliar with marijuana, Marijuana Is Safer provides an introduction to the cannabis plant and its effects on the user and debunks some of the government's most frequently cited marijuana myths.

More importantly, for the millions of Americans who want to advance the cause of marijuana policy reform--or simply want to defend their own personal, safer choice--this book provides the talking points and detailed information needed to make persuasive arguments to friends, family, coworkers, elected officials and, of course, future voters.

Sold out
Add to Cart